skip to main | skip to sidebar

WITH THE LACY'S AT LAKE LBJ, KINGSLAND, TX

October 16 – 19, 2010
Before we leave Waco I must mention that the name is pronounced “Way-co” and never “Whack-o”: Got it? And from the Texas Ranger Museum; I’ll bet you didn’t know that the western “White Hat for good guys / Black Hat for bad guys” came from the Texas Rangers who started with the white hats as a sort of uniform way back in 1823 and has continued to the present day.

So it was off to the Lacy’s compound on Lake LBJ (That’s Pres. Lyndon Baines Johnson for you non-Texans) near Kingsland, TX. We arrived before noon and with several hundred acres to choose from, we found a parking space right in front of their large metal building where we had an electrical hookup; cell-phone and internet service was good as well as our satellite TV. “Life is good!”


Jerry and Gay Lacy greeted us and after settling in, we took off for a light lunch at a little Mexican restaurant in Marble Falls called Janie’s.

Jerry drove us off to a Wooden Boat Show at the exclusive Horseshoe Bay Resort on the south shore of Lake LBJ. The boats ranged from the 1920’s through to the 1970’s and many were the famous Chris Crafts.
Most were inboard powered and many featured picnic layouts complete with a bottle of wine with glasses. You could just see the many hours of loving work put into restoring and maintaining these beautiful power boats; but since the 70’s the fiberglass hulls are so much easier to maintain that the wooden boats have all but disappeared. There were probably thirty boats on display and we enjoyed inspecting them all; it isn’t often that you get a chance to see such a gathering.

We headed back around the lake to their home, and after a little rest, Fran and Gay got together to fix dinner: Fran’s special barbecued baby back ribs, beans, corn pudding (which Fran forgot to add the cornmeal so it wouldn’t set up properly), fruit cobbler and ice cream, all cooked in Gay’s brand new kitchen! We sat around and chatted until the mosquitos started eating their dinner on Fran, and then retired for the night.
﻿
﻿﻿
﻿﻿ ﻿Sunday dawned bright and clear and promised another beautiful Texas day, perfect for touring the area and showing off the Hill Country. We headed out for the monthly Trade Days flea market in Fredericksburg, about an hour’s drive away. We first visited Fredericksburg in the mid-90’s for a Revconeer rally and enjoyed the little “German” town, with several German restaurants and numerous boutiques and stores to wander in and out. It is also the home of the Museum of the Pacific, which contains individual museums devoted to Admiral Nimitz and another for George H. W. Bush. Although we didn’t go into it this time, we could see that the museum has expanded in size since the last time we visited there.

﻿﻿﻿﻿﻿﻿﻿﻿﻿﻿﻿﻿﻿﻿﻿
﻿﻿﻿ We spent a couple hours at the flea market, in which Fran found a cute pair of Indonesian-made wooden sandals decorated in purple beads. Unfortunately, they were too small, so she didn’t buy them. Awwww!.


We continued our drive and Jerry soon found a back road called the Willow City Loop.
﻿
﻿
This is about a 20 mile narrow roadway through Hill Country ranches with canyons, water fjords, cattle crossings and often makes for quite a challenging drive through private ranches that showed off the beautiful countryside, particularly in the spring when the blue bonnets are blooming. We stopped at a very ornamental ranch gate that said “Take me back to my sweet Texas home.”


Further along this route we found a longhorn bull that fortunately had a barbed wire fence to keep the bull in (or the people out!). 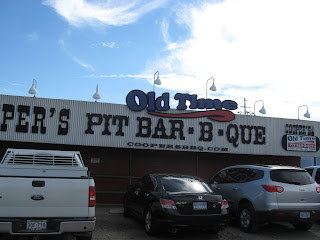 ﻿﻿ Meat is purchased by the pound, so as you walk up to the smoker to look at the meat, you tell the cook/server how much you want and he cuts off a chunk for you. Inside, the servers slice the meat and sausage and you can add any of the side dishes they offer.


Beans are complimentary, as are bread and HOT pickled jalapenos. Delicious! Even though it was only 4 p.m., the place was crowded and people were lined up out the door. 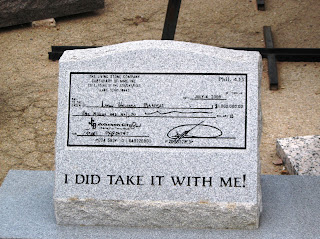 Just up the street in Llano is The Living Stone Co. with a huge outdoor display of granite from all parts of the world in almost every color and texture one could imagine.

They also had on display a gravestone engraved with a check for one million dollars and titled “I did take it with me!” Good for a few chuckles!

The road along Lake LBJ passed by the Lacy’s friend’s new construction, a beautiful and very expensive home along a waterway where he had bought an existing house, tore it down and built this beautiful new home, taking advantage of the gorgeous trees along the waterfront. 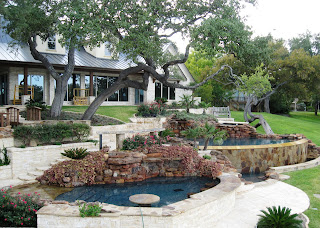 While the house is not quite finished, it is nonetheless an outstanding place. We didn’t bother to ask the price. (If you have to ask, you can’t afford it!) So that completed our tour of the Hill Country, but we had only scratched the surface; we saved the rest for another day.


For those of you who don’t know, Jerry and Gay’s house is a labor of love and is a house within a house, or a house within a metal building. Jerry has been doing most of the work himself and for folks who know Jerry, he is a true perfectionist. The kitchen is surrounded with seven foot dual paned windows with one of them having the outer panel cracked into hundreds of pieces, although none of them have broken out. This would make an interesting display at a modern art museum. In the evening all the cracks pick up the light from inside the kitchen; very beautiful! And it all came about when Jerry was running his lawn mower and it threw a stone at the tempered glass window--------crack!


On Monday morning, Gay, in anticipation of the big family reunion the following weekend, tried out her new appliances and made an excellent breakfast of pancakes and bacon. We sat at the table gabbing for several hours and suddenly, it was after 2 o’clock! Gay and Fran took off to do some shopping in Marble Falls, and a few hours later, Jerry and George drove in and we all met at Francesco’s Italian Restaurant for dinner.


Our next stop on Tuesday would be at the Escapees Tra-Park at Pecos, TX.